From the History of the Seminary

In 1722 a theological school was established in Belgorod by the efforts of Bishop Epiphany (Tikhorsky). This was followed by the foundation of the Kharkov Collegium in 1726, which, in the opinion of contemporaries, was “one of the best theological schools of the18th century».

In the middle of the18th century Bishop Peter (Smelich) opened small Slavonic-Latin schools in Belgorod, Kursk and Stary Oskol.
During the rule of Aggey (Kolosovsky), the Bishop of Belgorod and Oboyan, the Belgorod Slavonic-Latin School was reorganized into a ‘little seminary.’

The ‘little seminary,’ in the same way as the previous Slavonic-Latin School, was situated in the cells of the Nikolaevsky Monastery, which was established in Belgorod at the end of 16th century by a decree of Boris Godunov.
Bishop Feoktist (Mochulsky) was the founder of the Belgorod Theological Seminary.

In 1799, under the rule of Bishop Feoktist, the Belgorod Diocese was divided into Kharkov, Belgorod and Kursk Dioceses.
The Kursk seminary was situated in Belgorod and belonged to the Kiev educational district.

In 1817 a reorganisation of theological seminaries within this educational region took place.
On the 10th of September of that year a theological seminary was founded in Belgorod, and this day became its birthday. Archbishop Feoktist was elected as an honorary member of the Russian Academy of Sciences of the Imperial Kharkov University, and was awarded the Order of St. Anna of the 1st Degree and the Order of the Holy Prince Alexander Nevsky for his spiritual and educational activity.

In 1883, the theological seminary was moved to Kursk. A religious college continued the work  in Belgorod.
His Eminence Archbishop Pitirim (Oknov) re-established the Belgorod seminary later.
The Belgorod seminary was situated in two buildings opposite the Holy Trinity Monastery. Many outstanding people were among the graduates of the seminary:

Archbishops of the Russian Orthodox Church, advisers of the Holy Synod, professors of Moscow, St. Petersburg and Kharkov Universities, and many others.
His Eminence Makary, Metropolitan of Moscow and Kolomna (Michael Petrovich Bulgakov), a famous historian of the Russian Orthodox Church, theologian and publicist, was the most outstanding graduate of the Theological Seminary in Belgorod.

In 1917, when the Bolsheviks came to power, the Seminary was closed.

The rebirth of the theological seminary began in 1995.

On the 28th of September 1996 there was a celebratory opening of the Belgorod Orthodox Theological Seminary (with a missionary orientation).

His Holiness Patriarch of Moscow and all Russia Alexey II visited the seminary on that day.

Since the day of the re-establishment of the seminary, His Eminence John, Archbishop (since 17 July, 2012 — Metropolitan) of Belgorod and Stariy Oskol, has been its Rector.

The Archbishop’s choir, consisting of students of the theological seminary conducted by Archpriest Nicholas Katzi, has existed for more than 10 years at the Seminary.

The seminary’s orchestra, named “The Strings of Good News,” was created in 1999 by Priest Andrew Kolesnikov. Since that time he has been its conductor to this day.

The seminary’s students have taken part in different missionary expeditions since the seminary’s rebirth: to the Republics of Kalmikya, Karelia and Adygea, to the Chukotka Autonomous Region and Kamchatka. 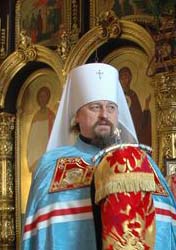 His Eminence  John, Metropolitan of Belgorod and Stary Oscol Diocese