Patron saint of the Seminary 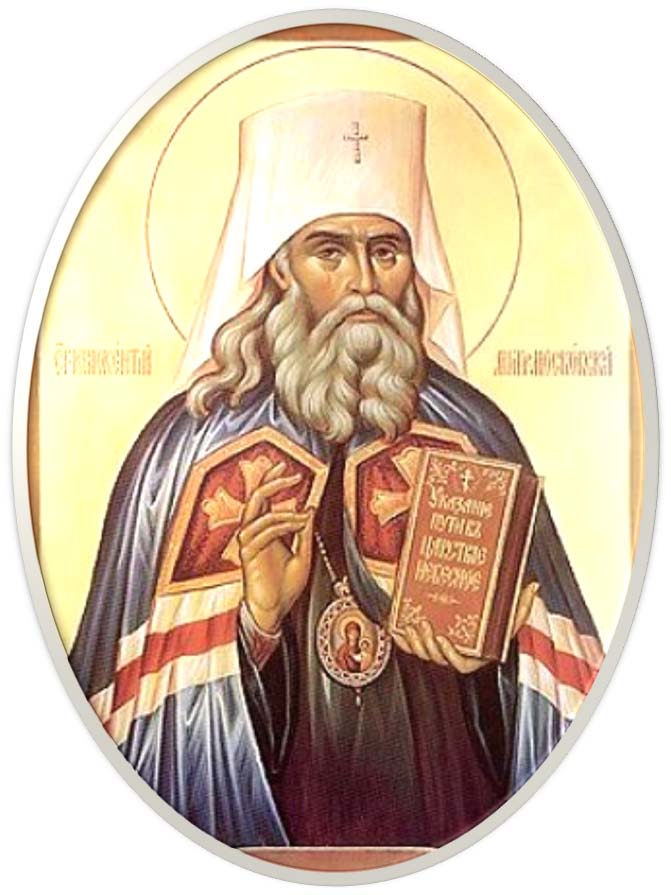 St. Innocent, the Metropolitan of Moscow (Ivan Popov-Veniaminov), was born on the 26th of August 1797 in Anginskoye, a village in the Diocese of Irkutsk, to the family of a sexton. The boy acquired reading and writing skills at an early age. He started reading the Epistle in church at the age of seven.
In 1806 he entered the Irkutsk Theological Seminary. Being the best pupil, the young man was given the name  Veniamin, in honour of the Archbishop of Irkutsk, Veniamin (d. 1814).
On the 13th May 1817, he was ordained a Deacon in the Blagoveshchensk Church of Irkutsk, and on the 18th of May 1821 he became a Priest.
In 1823 the future Apostle of America and Siberia began his missionary service. For 45 years St. Innocent (at that time, Father John) taught the peoples of Kamchatka and the Aleutian Islands, North America, Yakutia and the Khabarovsk region. Father John baptized ten thousand people in all, and built churches at which he founded schools.
During his numerous trips Father John studied the languages, life and customs of the peoples among whom he preached. His works on geography, ethnography and linguistics obtained worldwide recognition.
On the 29thof November 1840, St. Philaret, Metropolitan of Moscow, ordained Father John to the monastic life with the name Innocent.
On the 15thof December, Archimandrite Innoсent was ordained the Bishop of Kamchatka, Kuril and the Aleutian Islands. On the 21st of April, 1850 he was granted the title of Archbishop.
On the 5th of January, 1868 St. Innocent became the successor of St. Philaret, Metropolitan of Moscow.
Metropolitan Innocent created the Missionary Society, transformed the Pokrov Monastery in Moscow into a missionary centre, and in 1870 he founded the Japanese Orthodox Mission led by Archimandrite NikolayKasatkin.
St. Innocent managed the Moscow Diocese fruitfully. The Church of the Veil of theTheotokosat the Moscow Theological Academy was constructed through his efforts.
St. Innocent died on the 31stof March 1879, on Great Saturday, and was buried in the Holy Trinity-Sergius Lavra.
On the 6thof October 1977, St. Innocent was canonized as a saint by the Russian Orthodox Church.